skip to main | skip to sidebar

Death Of The Sun 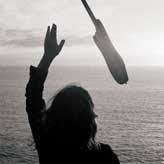 Death of the Sun is the solo debut album from former Metallic Falcons singer/songwriter Matteah Baim. Produced by Baim herself, the album features musical contributions from Jana Hunter, Devendra Banhart, Butchy Fuego, Robert Lowe, Rob Doran, Jon Beasley, and Birdie Lawson.
Baim recorded Death of the Sun June through August 2006 in part at home in Los Angeles as well as at Chicago’s CarterCo studio where James Carter engineered, all in analog. The album presents a world spaciously phrased and roughly edged, to bring you a type of New Age Grunge. Although its central theme is loss, a deeper sense of triumph lingers. The songs chronicle and depict the moon’s cycle of life and death, giving birth to romantic times.

Baim purchased her first guitar from a basement pawn shop in Milwaukee and bought her first album, a Doors bootleg called Whysky Mystics and Men around the same time. She then attempted an occult study of music, piecing together the odd bits she came across, learning music notation from simple classical scores, playing along with the records she found and whoever could give a passing lesson or had time to play.

Trading her beloved pawnshop guitar for an electric, she formed the band Metallic Falcons with Sierra Casday of CocoRosie. The Falcons created heavy, rich, ambigious songscapes for Desert Doughnuts, their only album.

As the Falcons “fly into the night,” Baim’s Death of the Sun emerges.
No comments:

No Depression for Memory Band 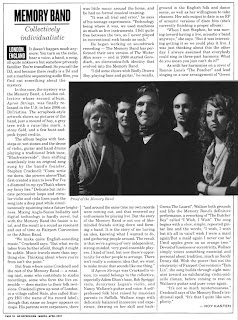 Pull out your old copy of Norton's Anthology. Here on their second album, the Memory Band-- once the brainchild of Stephen Cracknell of English folk-electronica outfit Gorodischj, now a fully collaborative unit-- draw from traditional British folk dating back more than a century. One song, here titled "I Wish I Wish", derives from a ballad collected by John Clare in the early 1800s (you might know it from Uncle Tupelo's "I Wish My Baby Was Born").

The album is not, however, the backwards-looking, academic exercise that such a description might imply; wisely, the band modernizes these influences, often in unexpected ways. There are covers of songs by Ronnie Lane ("The Poacher"), Rotary Connection ("Want You to Know"), and Carly Simon ("Why") among these old tunes, as well as a sly nod to Led Zeppelin on the opener "Blackwaterside". Plus, Rhys Morgan introduces programmed beats that are so well integrated into the music that you barely even notice the synthetic encroaching on the organic. Cracknell envisions the Memory Band in the tradition of folk supergroups of the 1960s and 70s, and he has certainly corralled an impressive line-up for Apron Strings, including Adem and members of Hot Chip and Simian. more
No comments: 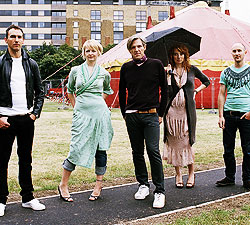 Download an MP3 of "Come Write Me Down" and don't forget to rate them (on the right) at the link above!
No comments: 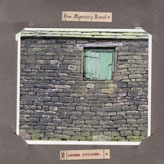 ***The Memory Band began life at the turn of the century, the progeny of one-time Gorodisch electronicist Stephen Cracknell, his computer and a lot of imagination. In addition to releasing Gorodisch records on the Leaf label, Cracknell founded the legendary Trunk label (reissuers of The Wicker Man soundtrack) and spent a short stint playing bass with Badly Drawn Boy.
The group's second album, Apron Strings, is a sublime blend of acoustic folk and homespun electronics. While many tracks were recorded live in the studio, others were created from loops recorded and manipulated by computer. Machines haven't completely paved over the hedgerows, however; alongside Cracknell, Apron Strings features the very non-machine-like talents of singer Nancy Wallace, violinist Jennymay Logan (of the highly respected Elysian Quartet), well-travelled violist Rob Spriggs and drummer / rocket scientist-in-residence Rhys Morgan. Adem, Alexis Taylor (Hot Chip) and Simon Lord (Simian, Garden) also turn in sparkling cameos.

The songs mix arrangements and bastardizations of traditional pieces-- a summery take on the trad "Blackwaterside" as beloved of Anne Briggs and Burt Jansch; a genuinely moving take on Irish folk gem "Green Grows The Laurel"-- with original compositions and unlikely cover versions (Carly Simon's "Why" and Ronnie Lane's "The Poacher"), to make an album both modern and timeless, completely unconstrained by most people's ideas of "folk music."

Apron Strings is released via the gentle might of Dicristina in North America and Peacefrog In Europe.


buy it
No comments:

... Settling into a more frank, charming older-aunt mode was Vashti Bunyan, eyes sparkling and pert, speaking voice firm and gentle like your junior high art teacher. "I can't believe I'm here," she told the crowd, who was clearly beyond thrilled that she was. Sitting amidst a young, talented, five-piece string band, Bunyan exuded a true sense of gratitude before she sang a single note. But once she began by introducing "Hidden", an immediate, comfortable intimacy arose, her songs leading down the halls of her past to illuminate memories framed in this simple, gorgeous, eloquent music. Bunyan's albums-- all anyone was familiar with-- are delicate and soothing. At this show, backed by acoustic guitar, violin, cello, banjo, and alternating flute, accordion, piano, and kalimba, she seemed far more robust and substantial, her compositions far more alive. And her voice still sounds like a dream.

Vetiver - To Find Me Gone 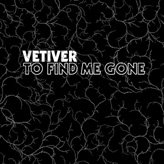 To Find Me Gone is the second album by Andy Cabic's ever-evolving band Vetiver , released two years after the debut self-titled release. Andy has since toured the world, usually as a member of Devendra Banhart's band, and sometimes even with Vetiver. In those two years, Vetiver has expanded into a full-on singer-songwriter band/project, aided and abetted by some of the best players (and usually his best friends) in the extended family of which Cabic finds himself a member. Cabic explains, "This album sure has a lot of folks playing on it, same as on a Bobby Charles or Jerry Jeff Walker record, all good folks and friends."

Once again skillfully crafted, produced and mixed with Thom Monahan (as on the debut), To Find Me Gone is a much different, more free and mature effort, reflective of Cabic's growth as a songwriter over the last two crazy, wonderful years. According to Cabic, "I feel the new album embodies the swirling duality of these last two years, the duality of presence and absence, both in how protracted its birth has been, and in its lyrical themes. There are scenes in the songs where figures come back from far away, to changes and time itself rolling by in their absence. To Find Me Gone has songs of remembrance and recollection, all made in order to conquer absence. It's a different kind of album, in that I think it's the kind of album you can get serious about and carry with you for a long time. In the end it's about the songs, how they all run into one another, and ran over all of us, as we churned up this album."

Musically, there's a dreamy Topanga Canyon vibe on select songs (maybe that's the pedal steel calling on "No One Word"), and there's also plenty of crunchy candy for those who have appreciated Cabic's recent nod toward the magic of '70s-era Fleetwood Mac (check out the screaming guitar outro of "Red Lantern Girls"). Yet everything is simply, amazingly Vetiver, not anything else; To Find Me Gone is Andy Cabic's own original statement, one that many will consider as one of the finest albums of 2006.

* Vetiver has successfully toured the USA, UK and Europe and will do so again after the album's release. The current band line up has blown everybody away like never before

* Numerous talented guests, and yes, Devendra Banhart plays on a couple of songs and co-wrote "Down at El Rio"
Vetiver's 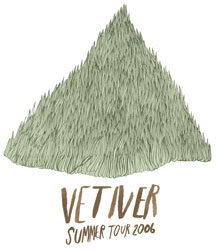 You can stream the entire album for free at Vetiver's website .
No comments: